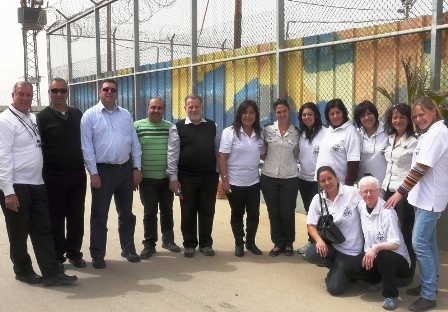 “And we know that in all things God works for the good of those who love Him, who have been called according to his purpose.” Romans 8:28

The eternal reward always outweighs the temporal sacrifice.Sometimes all what it takes is a little kindness, to remind us how much Godcares.Thank you for your big hearts. Your love, prayers and gifts make a bigdifference.Rejoice reaping the good harvest with us.

Dear Prayer warriors“If the Son sets you free then you are really Free” Visiting inmates with a group of committed people who come with faith and trust that Jesus died for these inmates as well. And those who accept HIM are given authority to be “The Children of God”

Impressions and Start of the Prison Visits 2017

Remember those in prison, as if you were there yourself. Remember also those being mistreated, as if you felt their pain in your own bodies. Hebrews 13:3 (NLT)

During the Christmas Season, a team of HOL volunteers visits around 21 prisons in Israel to meet, talk and pray with convicts of christian backgrounds, to sing songs and distribute little Christmas presents.

You are here: House of Light > Prison Ministry